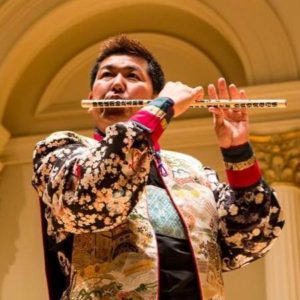 BUNTA SATOH, Tsugarubue player & composer
A passionate Tsugarubue player Bunta Satoh introduces the history and culture of Tugarubue, a Japanese bamboo flute from Tsugaru region in Aomori prefecture, to the world. Tsugarubue is popular in the region as one in every six people learns to play and the instrument is often played in festivals. Mr. Satoh has won the First Place as the second youngest winner in the history of the Hayashi (festival music) Contest in Japan. In 2011, he organized a challenge for Guinness World Records with the Tsugarubue players and made the world record of playing together with 3,742 players.

Mr. Satoh lives in Aomori, Japan performing throughout the country and also internationally. He plays traditional Japanese music and new music from around the world. He performed at the Festival Des Cultures Du Monde Gemenos in France in 2013, was featured in Hibikiya concert series in Singapore in 2014, and he was invited to perform at the International Council of Organizations of Folklore Festivals and Folklore Arts in Mexico in 2016.
In addition to performing the traditional Tsugaru music, he composes music and organizes workshops to inspire the new generation of Tsugarubue players.

He has released his third recording album “The Wind of Tsugaru” in January 2017 and made his Carnegie Hall debut performing a wide range of musical styles from traditional Japanese festival music to contemporary classical music including his own works in October 2019.